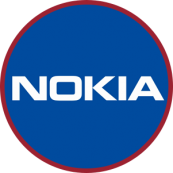 In the 1980s, Nokia's computer division Nokia Data produced a series of personal computers called MikroMikko. MikroMikko was Nokia Data's attempt to enter the business computer market. The first model in the line, MikroMikko 1, was released on September 29, 1981, around the same time as the first IBM PC.

Probably the most important strategic change in Nokia's history was made in 1992, however, when the new CEO Jorma Ollila made a crucial strategic decision to concentrate solely on telecommunications. As late as 1991, more than a quarter of Nokia's turnover came from sales in Finland. However, after the strategic change of 1992, Nokia sales to North America, South America and Asia became significant. The worldwide popularity of mobile telephones, beyond even Nokia's most optimistic predictions, created a logistical crisis in the mid-1990s, prompting Nokia to overhaul its entire supply chain.

By 1998, Nokia's focus on telecommunications and its early investment in GSM technologies had made the company the world's largest mobile phone manufacturer, a position it held until 2012. Between 1996 and 2001, Nokia's turnover increased almost fivefold from 6.5 billion euros to 31 billion euros. Logistics continued to be a major advantages over rivals, along with greater economies of scale.

Nokia launched the Nokia 3310 in 2000. It has become one of the most popular devices of all time. The Nokia 1100 handset launched in 2003, shipped over 200 million units, is the best-selling mobile phone of all time and the world's top-selling consumer electronics product, and contributed to the company's rise in developing markets. Nokia was one of the first to recognize the market opportunity in combining a game console and a mobile phone (both of which many gamers were carrying in 2003) into the N-Gage. The N-Gage was a mobile phone and game console meant to lure gamers away from the Game Boy Advance, though it cost twice as much.

Nokia Productions was the first mobile movie-making project which was directed by Spike Lee. Work began in April 2008, and the movie premiered in October 2008.

Series 40 was a phone platform used in feature phones, mainly running Java-based applications. It was once the world's most popular software of mobile phones.

Nokia acquired Smarterphone, a company making the Smarterphone OS for low end phones and merged it with Series 40 to form the Asha Platform, which also inherits some UI characteristics from Nokia's MeeGo platform. The Asha 501 was the first phone running the new OS.

Symbian was Nokia's main smartphone operating system until 2011. Symbian was popular among the smartphone market during the 2000s.

The 2012 Nokia 808 PureView had a record 41-megapixel camera, and represented the end of the Symbian platform after its replacement by Windows Phone.

Nokia 6600 from 2003 with a VGA camera, Bluetooth and expandable memory. It was the first Nokia and Symbian device to sell over a million. (Series 60 2nd)

The Nokia N8 released in September 2010 is the first Symbian^3 device, and the first to feature a 12-megapixel autofocus lens. (Symbian^3/Anna/Belle)

The Nokia 808 PureView, released in February 2012 as the last Symbian smartphone, features a 41-megapixel camera and a 1.3 GHz CPU. (Belle)

The Maemo project later merged with Intel's Moblin to create MeeGo. The Nokia N9 was released before the project was abandoned in favour of Windows Phone.