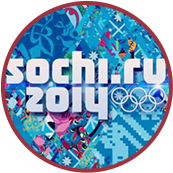 The 2014 Olympic Winter Games were the first time that the Russian Federation hosts the Winter Games; the Soviet Union hosted the 1980 Summer Games in Moscow. The host city Sochi has a population of 400,000 people and is situated in Krasnodar, which is the third largest region in Russia.

The Games were organised in two clusters: a coastal cluster for ice events in Sochi, and a mountain cluster located in the Krasnaya Polyana Mountains. This made it one of the most compact Games ever, with around 30 minutes travel time from the coastal to mountain cluster.

The Sochi Olympic Park was built along the Black Sea coast in the Imeretinskaya Valley, where all the ice venues such as the Bolshoi Ice Palace, the Maly Ice Palace, the Olympic Oval, the Sochi Olympic Skating Centre, the Olympic Curling Centre, the Central Stadium, the Main Olympic Village and the International Broadcast Centre and Main Press Centre, had been built anew for the 2014 Games. The Park ensured a very compact concept with an average distance of 6km between the Olympic Village and the other coastal venues.

A record number of over 2,800 athletes were entered, more than 40 per cent of whom were women.

Ninety-eight titles in 15 disciplines were awarded in Sochi.

Medals were won by athletes from 26 National Olympic Committees.

More than 2,500 doping tests were performed, in the largest detection campaign in the history of the Olympic Winter Games.

More than 1.1 million tickets were sold.

For a record 102,000 hours of broadcasting on all platforms (television and digital), the potential number of viewers during the Games was 4.1 billion.

There was more social media activity than ever, with more than 2.2 million new followers on all platforms, and a total 7.7 million Facebook fans.