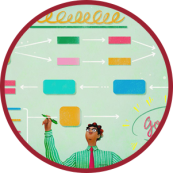 How to Build a Successful Team

Building a successful team is about more than finding a group of people with the right mix of professional skills. Over the course of interviewing over 500 leaders for Corner Office, I asked them all about the art of fostering a strong sense of teamwork. Their insights can help you lay the groundwork for a highly productive team that can communicate, cooperate and innovate in an atmosphere of mutual trust and respect.

You need a clear and measurable goal for what you want to accomplish.

If you ask enough top executives about their leadership style, you’re likely to hear a number of them say, “I hire the best people and get out of their way.” It’s a good line that makes sense at a certain level. Hiring the right people is the most important part of building a strong team, of course, and delegating to give people more autonomy is a powerful motivator.

But managing a team is not that simple. Leaders have to play a far more hands-on role to make sure the group works well together and remains focused on the right priorities.

There are six main drivers for creating a strong culture of teamwork – the things that, if done well, have an outsize impact. And the insights are applicable to any team or organization, from five people to 500,000.

And that may sound simple, but it is often one of the greatest challenges that teams, divisions and companies face. What does success look like? If you were to set up a scoreboard to track success over time, what would it measure?

The trouble often starts when leaders start listing five or seven or 11 priorities. As Jim Collins, the author of the best-selling management books “Good to Great” and “Built to Last,” is fond of saying: “If you have more than three priorities, you don’t have any.” Determining these priorities and how they’re going to be measured is arguably the most important job of a team leader because most of the work that everybody does will flow from those goals. Those priorities have to be lined up as carefully as the trajectory of a rocket launch, because even the slightest miscalculation can take a team off-course over time.

Have a Shared Scoreboard

Another benefit of having a simple plan is that it creates a shared goal that will offset the tendency of people to identify themselves as part of smaller groups. Think of a football team, for example. There are many “tribes” within a team – offense and defense, linemen and receivers, running backs and defensive backs. But because the goal of the team is clear, and there’s an external scoreboard to track progress, there is a greater sense of “us” on the team than the “us and them” dynamic that can often divide colleagues in companies.

“Metrics are actually the way that you can harmonize a large number of people, whether it’s dozens or even thousands,” said Adam Nash, the former chief executive of Wealthfront, an online financial management firm, who is now an executive in residence at Greylock Partners, the venture capital firm. That way, he added, “when they’re on their own and making their own decisions, they can be empowered to make those decisions because they know they’re aligned with the rest of the company.”

In the absence of that simple, shared scoreboard, people will make up their own ways to measure their success, Mr. Nash added.

Once you have a simple plan, you have to keep reminding your team of the priorities, even if it can feel repetitive. People often have to hear something a few times before they truly remember it. Marc Cenedella, chief executive of TheLadders.com, a job search site, shared a good rule of thumb:

“You say something seven times and they haven’t heard you,” he said. “Until they start making jokes about how often you repeat it, they haven’t internalized it.”

All families have values, even if they aren’t discussed explicitly.  There are certain behaviors that are encouraged and discouraged — like rules of the road — for how everyone is going to (try to) get along and spend their time.

Teams aren’t really that different. Pull together a group of  people to work on any project, and they will develop a culture of their own, and it will be as unique as the people in the group.

As a leader, you can take a laissez-faire approach and hope the team meshes well over time. Or you can look for opportunities to set some shared guidelines for how  people will work together.

There are no hard and fast rules for developing the cultural values of a team. In some cases, the founder of a company will issue them to employees. In others, top executives will turn the exercise over to employees to make it a bottom-up effort.
...And Stick to It

The most important thing is for the team or company to live by their stated values, rather than just going through the motions of the exercise, with people earning promotions even though their behavior runs directly counter to the stated rules of the road.

“I think it’s easy for people at many companies to become cynical, which then leads to politics, which can create a cancer that can topple even the greatest companies,” said Kathy Savitt, managing director at Perch Partners, a consulting firm.

A couple of other traps to avoid:

- Don’t make your lists too long. Most people can’t remember more than three things day-to-day, and the lists don’t need to somehow address all potential human behavior, good and bad. Just focus on the things that feel unique to the group or organization, and are good reminders to keep everyone aligned and moving forward.
- Specific is better than vague. Many lists of values share similar words, like excellence and integrity, but those broad notions can create problems of their own, said Michel Feaster of Usermind, a customer-engagement software firm. “The problem with values like respect and courage is that everybody interprets them differently,” she said. “They’re too ambiguous and open to interpretation. Instead of uniting us, they can create friction.”