How Under Armour is outsmarting the Olympics' strict advertising rules

Official sponsors of the Olympics are shelling out tens of millions of dollars for the privilege, but advertisers are doing their best to get around the restrictive rules by sponsoring athletes instead, which costs far, far less.

Under Armour is not an official sponsor at the Rio Olympics, but it has ties with some of sports most high-profile names including Michael Phelps, Andy Murray in tennis, Jordan Speith in golf and Kelley O'Hara in soccer.

Instead of having to pay vast amount of cash to sponsor Phelps' Olympic performances, the company is craftily using social media to associate themselves with the Olympian for a fraction of the cost, using creative ways to congratulate the swimmer.

'It's what you do in the dark, that puts you in the light,' said a tweet, posted minutes after Phelps won his record 20th gold medal. Under Armour tagged Phelps in the post alongside its 'Rule Yourself' slogan, an American flag and an applause emoji. 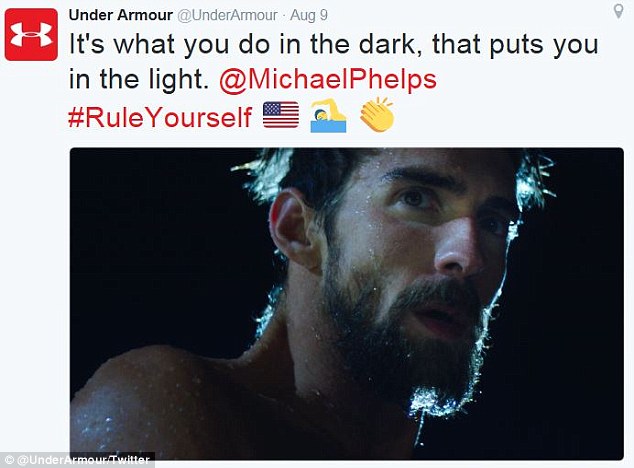 Michael Phelps is swimming for his last time at the Olympics and collecting a few more gold medals along the way, but his name is also making millions for Under Armour clothing


Michael Phelps is swimming for his last time at the Olympics and collecting a few more gold medals along the way, but his name is also making millions for Under Armour clothing 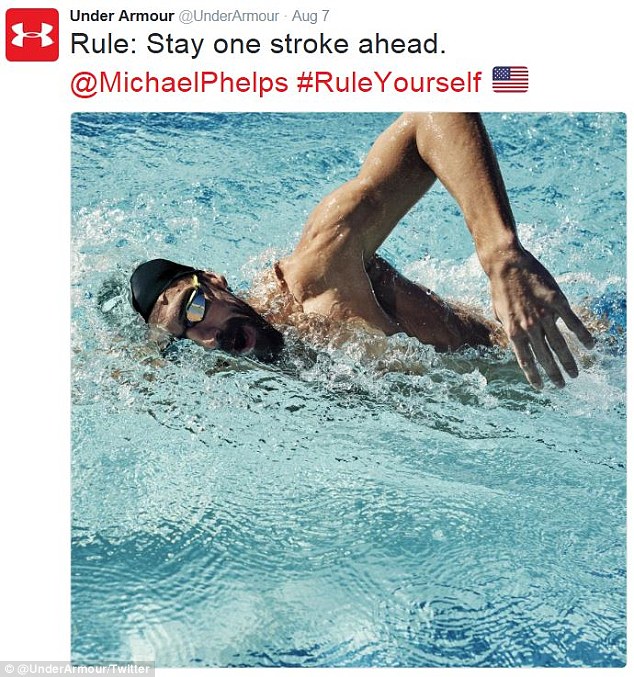 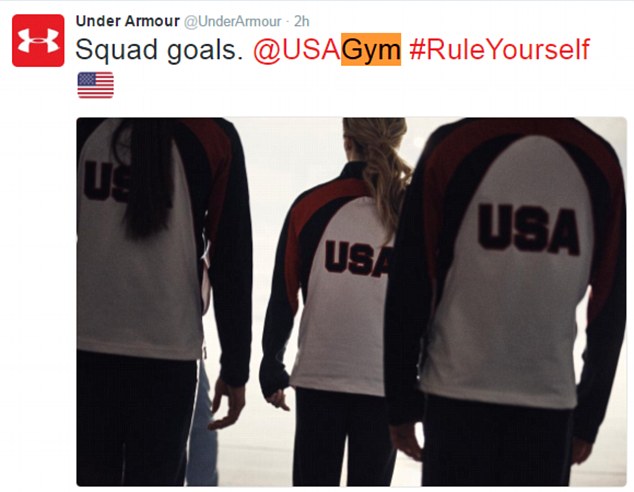 In the past, Phelps has called Under Armour-backed athletes a 'family' and its chief executive Kevin Plank a visionary with 'mind-blowing ideas.'

At these Olympics, companies are now operating under newly liberalized sponsorship rules - enacted after years of lobbying by athletes and their agents.

Under Armour won't pay the USOC or the International Olympic Committee for such mind-blowing branding opportunities. The company is not an official sponsor of the games. That privilege costs brands such as Nike, Visa and McDonald's tens of millions for explicit rights to use the rings, the word 'Olympics' and other intellectual property.

But Under Armour's campaign showcases the changes to so-called rule 40, which ends a marketing blackout during the games for companies who sponsor athletes rather than the event itself. 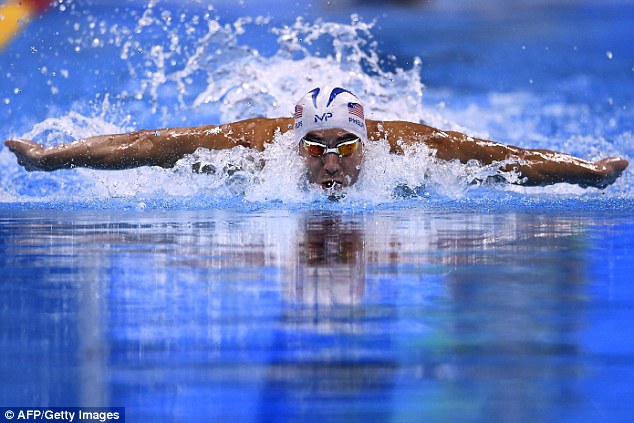 Under Armour still isn’t permitted to use "Olympics," the rings logo or a variety of other references such as the words "gold" and "Rio" in ads or social media 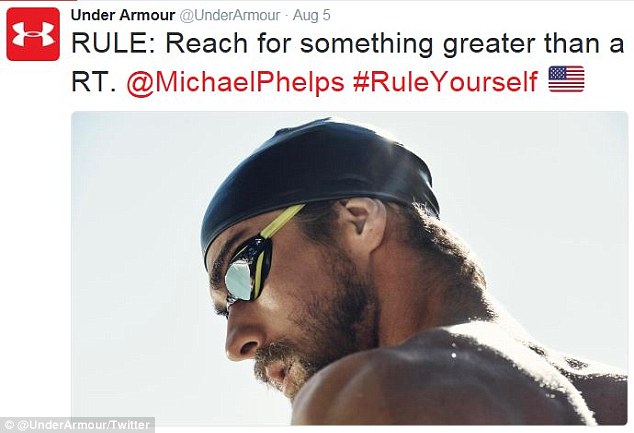 Under Armour still isn't permitted to use 'Olympics,' the rings logo or a variety of other references such as the words 'gold' and 'Rio' in ads or social media

The company is permitted under relaxed Olympic rules to showcase its athlete ambassadors. 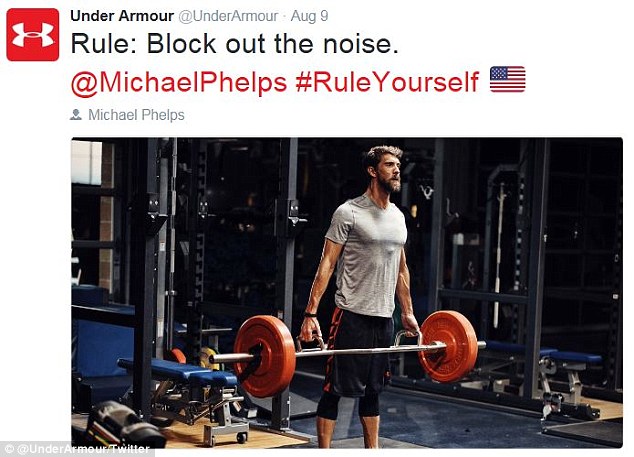 Under Armour has garnered about $200,000 in brand value from fleeting moments in which NBC cameras caught Phelps wearing the company's logo on a hat and sweatshirt between events. But only Nike's logo can be visible once Phelps steps onto the podium to accept his medal.

That said, Under Armour designed the uniforms of several prominent Olympic teams, including Team USA's gymnastics team. It means the company's distinctive logo will be on display every time the teams compete.

Phelps is Under Armour's biggest athlete on its books. Beyond Phelps, Under Armour has backed a fleet of about 250 athletes - from the famous to the obscure - and has so far used a wide range of creative tactics to connect its brand to the Olympics.

The apparel company has rented a series of outdoor gyms on a 50-mile stretch of beach in Rio to set up marketing outposts and host daily workouts for fans during the games. It has entertained VIP guests in a penthouse where they can mingle with its stable of athletes. 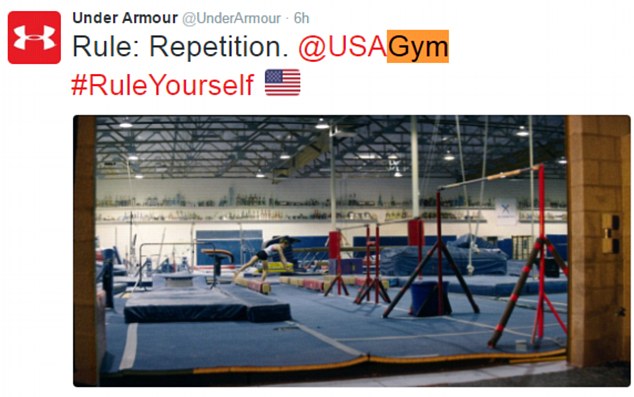 Sales of women's training gear have been growing for Under Armour, which is likely to benefit from its sponsorship of the immensely popular gymnastics team. 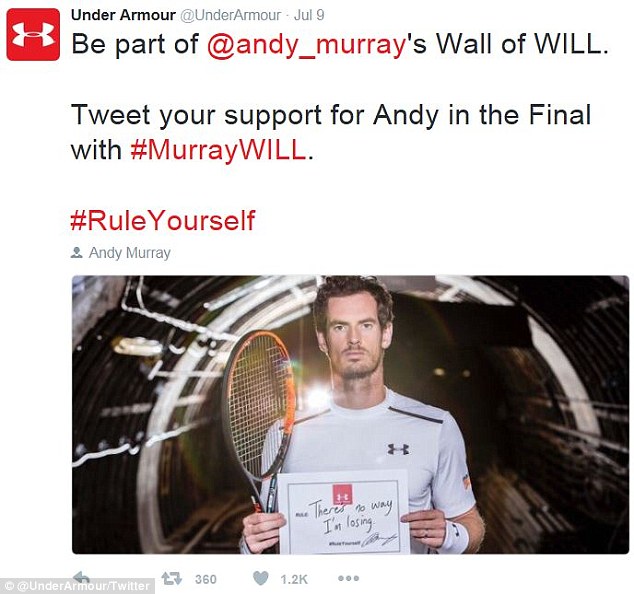 Britain's Andy Murray, the Wimbledon tennis champion, is also on Under Armour's books

Official sponsors are of course worried the rule change could undermine their massive investments and are keeping a keen eye out for potential infractions by other companies.

John Lewicki, who oversees global Olympic sponsorship deals for McDonald's Corp , said his company will use these games to evaluate whether to continue future Olympic deals.

'I wouldn't necessarily say we're all happy about it,' Lewicki said. 'If we find rule 40 impacts the value of our sponsorship, we could always go back and renegotiate for the future.'

McDonald's current deal runs until after the 2020 summer games in Tokyo.

Lisa Baird, USOC's chief marketing officer said in a statement that 'the USOC relies on partner support and works very hard to protect their Olympic rights, but while doing so we also look to expand opportunities for Team USA athletes.'

The IOC said in a statement that it takes ambush marketing seriously and will protect its sponsors' exclusive rights. 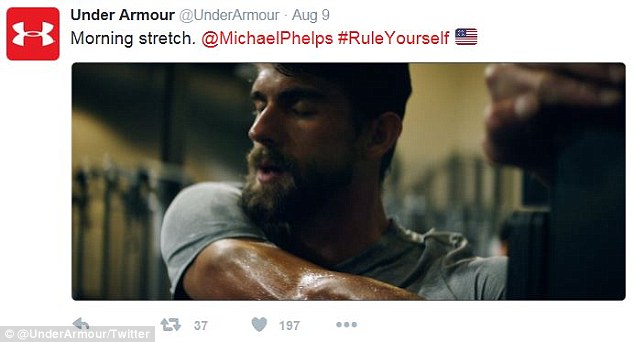 'If there is a concerted effort to create an unauthorised commercial association with the Olympic Games or the Olympic properties, then we will take swift action,' the statement said.

Before the rule change, approved last summer at the IOC session in Malaysia, athletes had long argued they were deprived of commercial attention and income during their most marketable moments.

Peter Carlisle, who represents Phelps as an agent, said the rule changes help famous athletes like his client.

Companies sponsoring individual athletes or teams had to submit their plans months in advance to the USOC or other national committees to ensure the campaigns do not infringe on Olympics copyrights. Sports agents estimate that hundreds of brands applied for U.S. waivers.

To feasibly take advantage of rule 40, athletes would have had to find sponsors at least six months before the games to meet the deadlines for brands to submit waiver requests. 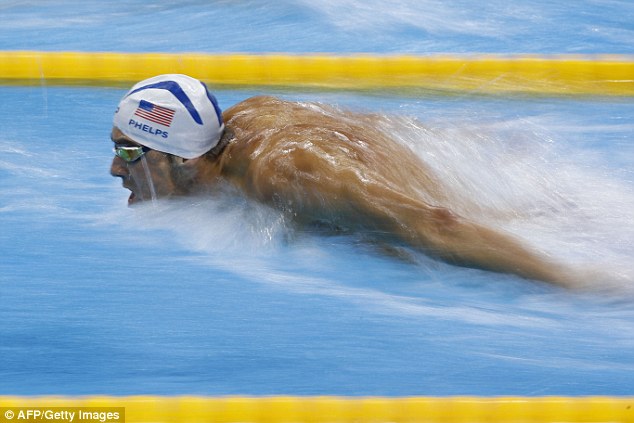 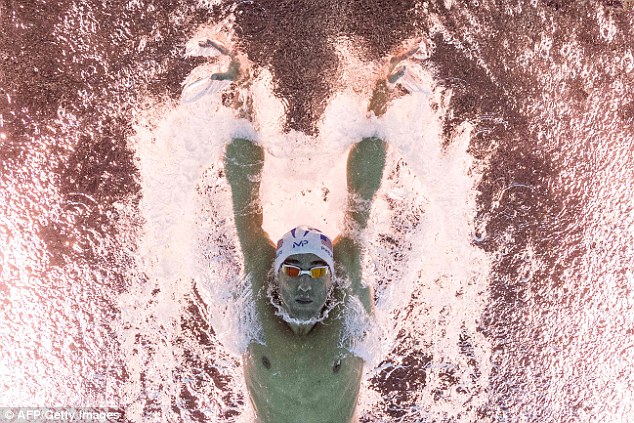 The U.S. committee required nonsponsors to begin airing their commercials by late March, which explains why Under Armour unveiled new ads with Phelps and the gymnastics team earlier this year

Under Armour - along with dozens of other companies, including camera maker GoPro and beverage brands Red Bull and Gatorade, a unit of PepsiCo Inc - began their flashy campaigns featuring Olympians months ago. Each of them then sought approval to continue them during the games.

In March, Under Armour released a commercial showing Phelps swimming to a song called 'The Last Goodbye,' and then facing a flash of cameras.

'As long as you don't use Olympic intellectual property, like the rings or the word Olympic, you can make something that looks very beautiful,' said Lowell Taub, head of sports endorsements at CAA Sports, an agency that works with Olympians such as gymnast Gabby Douglas.

The top global sponsors spend about $25 million per year for the rights, or about $100 million for four-year period that includes a summer and winter games.

The IOC hopes to double fees to $200 million per four year period starting in 2021. 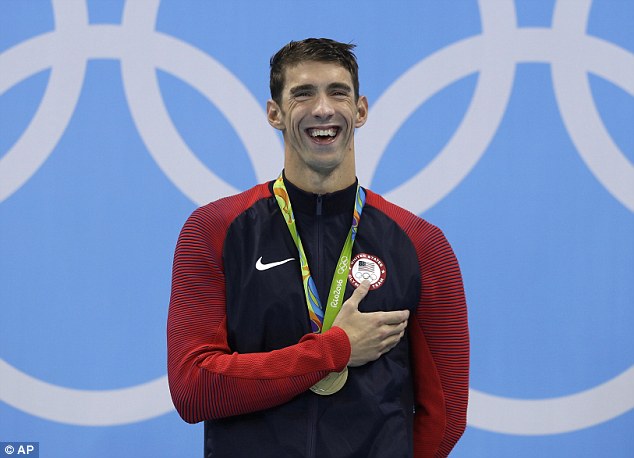 Under Armour will likely spend considerably less. It has chosen instead to cut much less expensive deals to outfit the athletes in several national governing bodies, which are groups that oversee specific sports in various countries such as USA Gymnastics, USA Boxing, Rugby Canada and beach volleyball in Switzerland and the Netherlands.

The company does not disclose how much it invests in Olympics marketing, but it reported in a filing that its marketing costs rose by 14 percent - to $122.5 million from $107.6 million - during the first quarter ended March 31, compared to a year ago.

The company attributed the increase to 'key marketing campaigns and investments in sponsorships' in the filing, which covered the period when it unveiled Olympic-themed commercials.

Under Armour plenty of reasons to keep pushing hard at the Olympics, said Morningstar analyst Paul Swinand. Unlike Nike, only a small percentage its sales come from international markets, and it needs to catch up to rivals in India and China, he said.

Peter Murray, vice president of sports marketing for Under Armour, didn't rule out becoming an official sponsor at some point.

'As we look to grow the brand and the business around the world outside the US, Olympics will continue to play a role in that,' Murray said. 'We are really just getting started.' 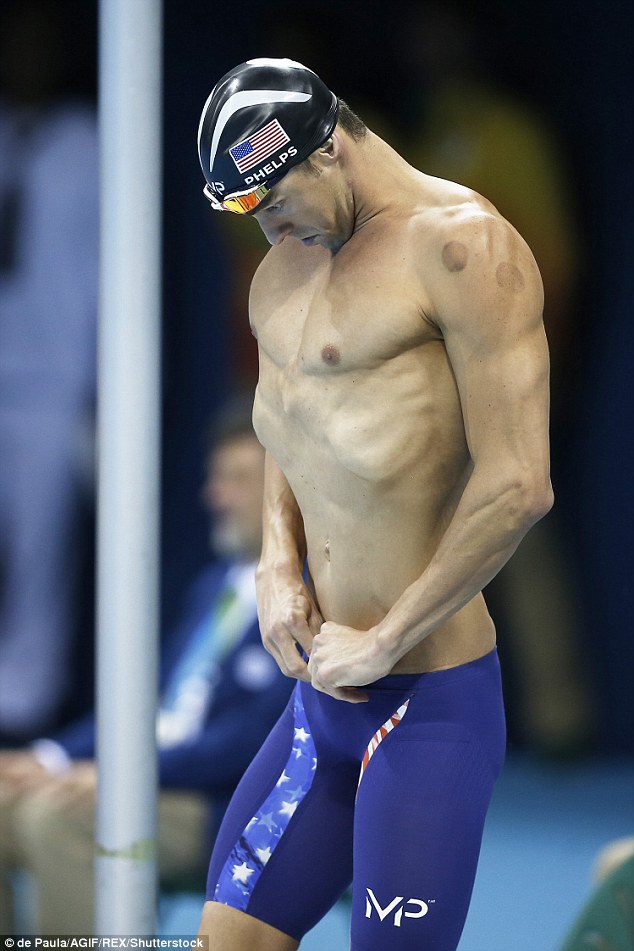 Phelps wears one of his Under Armor sponsored speedo on Thursday